is part of the Informa Markets Division of Informa PLC

This site is operated by a business or businesses owned by Informa PLC and all copyright resides with them. Informa PLC's registered office is 5 Howick Place, London SW1P 1WG. Registered in England and Wales. Number 8860726.

Standards will be key to success of blockchain in shipping

Maersk may have first mover advantage with its TradeLens blockchain product. But customers’ ability to utilise rival systems will be crucial to its uptake. By James Baker, Managing Editor, Lloyds List Containers 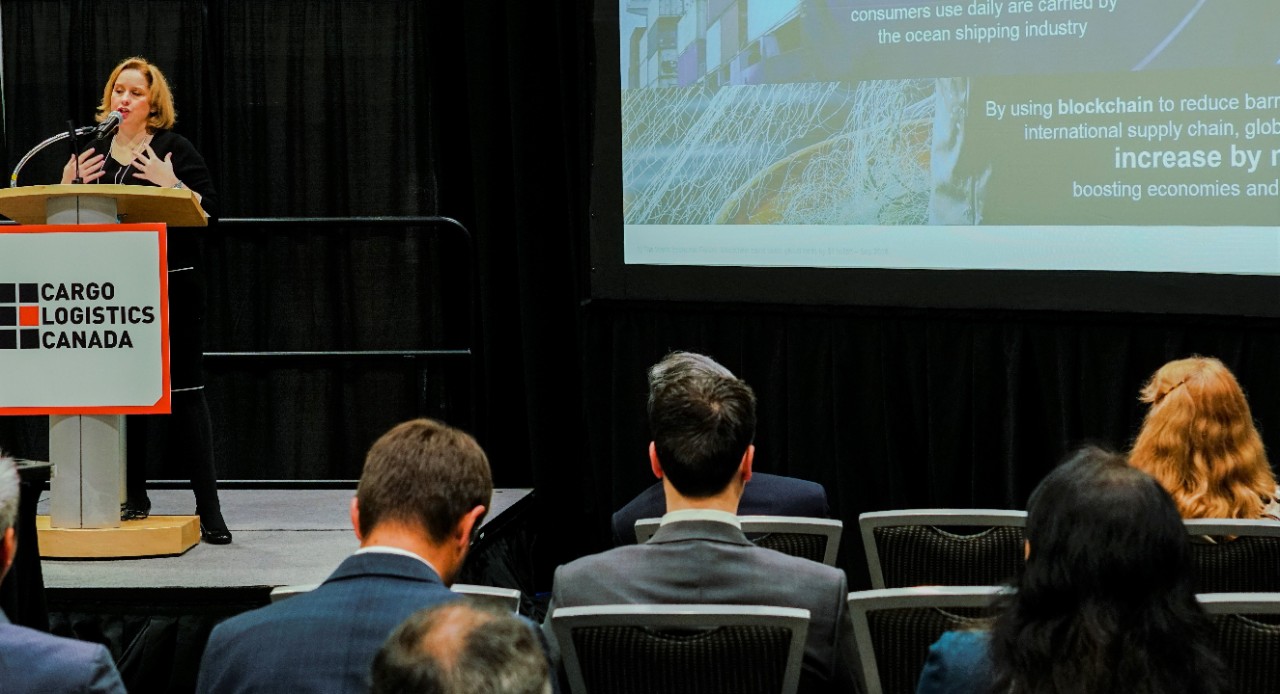 THE use of blockchain technology within the maritime industry is creating an “ecosystem of players trying to connect,” the Cargo Logistics Expo + Conference in Vancouver has been told.

“You have non-vessel operating carriers, beneficial cargo owners, ocean carriers, customs agencies, truckers and all the other players that operate in the supply chain,” said Alison Clafin, director of network development at TradeLens, a platform developed to promote efficient and secure global trade.

Using blockchain — the technology used for verifying and recording transactions — these entities could be brought together to extract new information that would help them bring new value to their customers and to each other.

“But the question is how these ecosystems engage together, not just independently,” Ms Clafin said. “That brings the exponential value.”

TradeLens intends to enhance the shipping industry through a secure interface exclusively dedicated to freight transport. It was created by Maersk and IBM to promote more efficient and secure global trade.

Interoperability — the ability of computer systems or software to exchange and make use of information — will be critical for widespread adoption of the technology but creating standards that allow different systems to talk remains a challenge, Ms Claffin added.

“Standards are fundamental,” she said. “In shipping, we’ve been notoriously behind on establishing even the most basic standards, such as port codes.”

She said it was important to have interfacing standards so platforms could integrate.

“Electronic data exchange acts as a one-to-one communication, but the discussion now is how to connect with many other players.”

“No one thinks this will be an uncompetitive space,” she said. “But customers will start demanding that if they connect into one system, they should be able to connect into others.

“They want a network of networks so the idea of interoperability as new networks emerge is going to be increasingly important and where standard-setting will be critical.”

While humans could easily deal with variability in, for example, place names, machines could not.

This was part of the reason behind the establishment last year of an association of carriers in an effort to create standards between lines, she added.

But she said that Maersk was still making efforts to increase the utilisation of its own product.

“There is a trust factor out there, especially when you have Maersk as one of the key providers,” she said. “Clearly, having more shipping lines involved in TradeLens makes this a much richer environment. There are a lot of discussions going on with other carriers to see what opportunities exist to bring them together.”

But Maersk never expected to be the only player in this market.

“What we do see is that a lot of the announcements and models coming forward have similarities to what we are doing,” Ms Clafin said. “What that says is that this is an industry ripe for disruption. We anticipate being one of the players but not the only one.”

Cargo Logistics Canada is produced by Informa, the largest publicly-owned organizer of conferences, expositions and training events in the world. We are a global organization, with 150 offices in over 40 countries. Our exhibition business has the unique claim to fame of having operated shows since 1880 and our bloodline dates back to 1734 when the first issue of the maritime publication of Lloyd’s List was produced. Today Lloyd’s List is the world’s oldest newspaper and an important resource for the global shipping community.

Informa hosts exhibitions in almost all regions around the globe.

Click here to add this event to your Outlook calendar